Basis Of Singaporean Spirit - People Power: The Spectrum of SONG

[This is part of the book: “Basis Of Singaporean Spirit - People Power”. Links to the different versions: Online Version in this Blog; Printed Version in Amazon.com; eBook Version: Google Play / Google Books / Kindle]

Now you know about SONG. So what is your spectrum of SONG?

Over the years, I had seen people changed over time.

Things that they used to do, they simply refused to do it anymore. Why?

Well, they find it not befitting for them to do it anymore.

Take food as an example. After people acquired certain wealth or status, they started to avoid hawker centre or roadside food.

Well, technically, there is nothing wrong, but why should you restrict your own spectrum of SONG?

The following is a chart that I had devised. 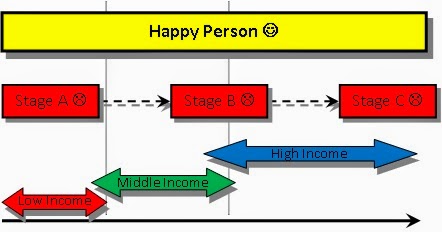 If you had acquired the capability to enjoy other forms of enjoyment, yet denied yourself of the older forms, what you had done is basically moving your window of enjoyment to the right, there is no significant increase in its width.

Worst, if your spectrum of enjoyment narrowed as you moved to the right, you will very likely forgo humbleness and appear as arrogant.

The truly smart and fortunate people are those who maintained their humbleness while expanding their spectrum of enjoyment.

Imagine putting on your most comfortable T-shirt, going to hawker centre in the morning for YouTiao (油條) and DouJiang[i] (豆浆), followed by snacking on kacang puteh[ii]. For lunch, eating in an air-conditioned food court, followed by Ice-Kacang[iii] as dessert. For dinner, putting on a more formal wear and dine in a Michelin 3-star restaurant; after the dinner, summoning the chef to teach him how to better cook the dishes the next time. SONG right?

Do you know of people who have broad spectrum of SONG?
On the Internet, it was mentioned that Facebook founder Mark Zuckerberg eats McDonald’s and wears the same shirt and hoodie every day. It was also mentioned that Google cofounder, Sergey Brin, often shops at Costco.

So what is your spectrum of SONG?

BOSS Wisdom: “Happiness is about expanding your spectrum of SONG, not shifting it up.” – BOSS

[i] YouTiao and DouJiang are Chinese fried breadstick and soymilk drink respectively. These are low cost meal that is often enjoyed together.
[ii] Kacang Puteh is a nut snack popular in Singapore in the old days. The seller will typically roll paper into the shape of a cone and fill it with the selected nuts to sell.
[iii] “Ice Kacang” is a dessert made of shaved ice, with attap chee (palm seed), red beans, sweet corn, grass jelly, etc. This is a favourite dessert in Singapore to ward off the hot weather.
[iv] Please refer to the chapter "Why Leaders Must Be Humble" for more details.

[This is part of the book: “Basis Of Singaporean Spirit - People Power”. Links to the different versions: Online Version in this Blog; Printed Version in Amazon.com; eBook Version: Google Play / Google Books / Kindle]
Posted by Unknown at Sunday, February 08, 2015